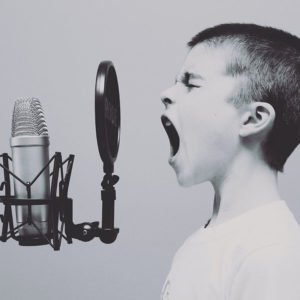 Could you finish your book or thesis without actually writing anything? Probably not, unless you can afford to hire a scribe. It’s possible, though, to reduce the amount of time you spend typing and slumped at your desk. Trying to extract three-dimensional ideas from our heads and into linear words is tough, even at the best of times. Wouldn’t it be nice if we could just talk about our research, then it would pop up on the screen? Well, it can!

In this post, I’ll review three dictation tools that might make your writing process a little easier: Office 365, Google Docs, and Dragon Dictate. I’ve dictated the same paragraph to all of them so you can compare the accuracy:

If you’re a Microsoft Office 365 subscriber (you probably have free access through your university), you can take advantage of Word’s dictation tool. Click the Dictate icon on the toolbar to get started. You can also choose your language here.

You get a lot control over the formatting with your voice and it’s easy to insert punctuation. It’s also possible to perform basic editing tasks, such as deleting specific words or sentences. For a full list of commands, visit the documentation page.

As you’ll see in the screenshot, it didn’t recognise the dash. The official command is em-dash, which it transcribed rather than executed. It also added a space after the opening quote mark and didn’t capitalise the first letter. Hmm, not bad, but I’d need to spend some time tidying everything.

In Google Docs, you can access the voice typing feature through the Tools menu or the keyboard shortcut Ctrl+Shift+s.

You’ll then see a little pop-up window with a microphone. Make sure you’ve chosen the correct language, then click on the microphone and start speaking.

You’ll notice that the accuracy isn’t great. Also, Google Docs only recognises very basic punctuation, such as fullstops, commas, and question marks. Oddly, it’s not possible to add quote marks or dashes. Full instructions are included in the Google Docs documentation.I also found that it would stop listening if I paused for more than a few seconds. I was waffling away to myself and didn’t my thoughts weren’t being captured. Apparently, even dictation tools can get bored.

Who wouldn’t want a friendly dragon that takes dictation? Dragon is probably the most popular speech recognition software, and it’s also the best. Unlike tools such as Office 365 and Google Docs, it learns to recognise both your speech patterns and your vocabulary. The more you dictate, the greater the accuracy. You can also train your dragon with documents, emails, and existing audio recordings. It’s compatible with all your applications, too – MS Word, Notepad, Scrivener, whatever you want to use.

In this screenshot, I’ve dictated in an application called Sublime Text. The tiny flame icon shows that Dragon is listening and ready to transcribe. As you’ll see, it transcribed my words flawlessly:

There are lots of different versions that all work in slightly different ways. If you’re serious about investing in a Dragon, I’d heartily recommend starting with Scott Baker’s book, The Writer’s Guide to Training Your Dragon. With his guidance, users can achieve up to 5,000 words an hour and 99% accuracy.

The software costs from £79.99-£279.99, depending on the features you need (Scott’s book can help you decide). It’s definitely not a cheap option, but it could transform the way you write. There are generous educational discounts available, too, if you have an academic email address.

I use dictation most days, so Dragon Dictate is a clear winner for me. It took me a week or so to get used to its ways, but I’ve saved a lot of time and made much faster progress with my writing. I’m no longer tied to my desk, either, as I can record my speech on a dictaphone and feed it to my Dragon afterwards.

Other people can probably achieve better accuracy with the Microsoft and Google alternatives – it’s likely to depend on your accent and tone. Famously, voice recognition software is usually trained on American male voices. The quality of your microphone makes a big difference, too. Cheap equipment won’t detect the subtle differences and also suffer from interference. I use the Zoom H2n (affiliate link), which is an excellent microphone and also works like a dictaphone. This means I’m able to wander around while I’m talking to myself.

Could I write a book just by talking to myself? I’ll let you know.